Menu
About Us Menu

The Museum of Rutherford Hospital opened October of 2005.  It was created because the Hospital has played an important role in Rutherford County history.  It was felt that something should be done to record and preserve the Hospital's heritage before it all disappeared with the passage of time. 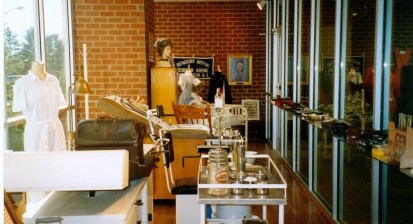 The design of the museum features vignettes that showcase several areas of hospital life.  It is a treasure trove of artifacts including many pieces of medical equipment and furniture from earlier years at the hospital.  Other items were used privately by physicians in Rutherford County who were once associated with the hospital. 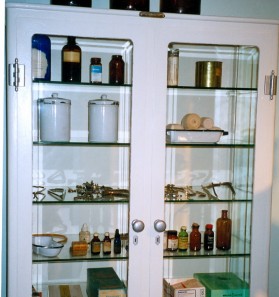 Among the prized pieces of the collection are a massive roll-top desk used by Dr. Henry Norris, one of the three founders of Rutherford Hospital located in the Founders' Corners.  He used the roll-top desk in the 1906 hospital and later in the 1911 building.  Also in this vignette you will find a Windsor-style chair and wooden serving tray from 1906.  The desk has remained at Rutherford Hospital. Over the past 10 decades, but has spent much of its life since the 1940s in storage.

Metal and glass supply cabinets from the 1906 period, operating and examining tables, iron beds, wheelchairs and bassinets used prior to World War II are also on display.  Black leather doctors' bags, medicine bottles, mortars and pestles, and a generous collection of surgical instruments add depth to the museum.

A 45-foot mural, completed by artist Clive Haynes in the spring of 2005, is a panorama of the Hospitals' history.  It progresses from the early visits of Dr. Henry Norris (one of the three founders of Rutherford Hospital) to the Green River Plantation, through the period of the hospital's founding in 1906 to the present day.  More than 50 hidden objects display the whimsical nature of the artist and his talent and intrigue visitors of all ages.

Rutherford Hospital: The Legend and the Legacy

In 2005, Robin Lattimore North Carolina history author wrote a history book to tell the story of Rutherford Hospital from its earliest days to the present.  It recounts both the legends surrounding its founding and the legacy of better medical care that the hospital has brought to the county.  The importance of Rutherford Hospital lies not only in the vision of its founders, but in the dedication of the hundreds of men and women who have worked diligently to provide quality healthcare.  Their compassion is the hospital's true legacy.